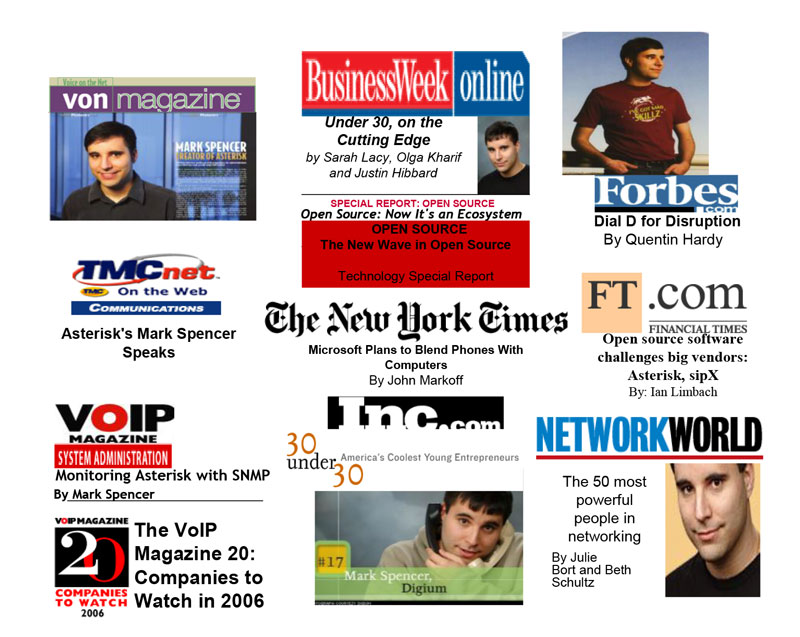 How Digium, a little-known, low-revenue, Alabama-based company has turned into the darling of the telecom world.

Upon entering the Digium headquarters our very first time, it prompted looks of skepticism among the MRB representatives present. It was a tiny office cramped with about 15 very casually dressed employees, just one of those over the age of 25. Greeted by their 24 year old CEO, adorned in a sweatshirt reading “Geek”, shorts and flip flops, he discussed the technology and their inability to get the attention they felt they deserved. Prior to hiring MRB, they managed to get a few stories written about them in trade publications, and one in the Huntsville Times, but needed to tell the world about their technology. Although Asterisk had been developed 5 years earlier, it had attracted attention from open source developers around the world that debugged, added code and features, but no one else. With 100,000 downloads, mostly from hobbyists and open source enthusiasts, it was hardly on the radar of the telecom giants or the loyal media and analysts that tracked the industry. It now was getting closer to the point when it would be ready for business use.

MRB took this little know company with just a few million in revenue and did what everyone had told us couldn’t be done. Digium is tracked by media and analysts as closely as any telecommunications vendor.  We have generated nearly 500 print articles, created celebrity status for Digium’s president Mark Spencer, and most importantly, put money in their pockets. Venture capital firms have invested nearly $20 million because of the mindshare Digium has generated in the telecom space. That was the second largest amount ever given to an open source vendor. Revenues have multiplied over 10 timers since we began.  The advertising equivalency value rating of articles placed far exceeded
$10 million dollars. Based on our fees, that turned out to cost Digium less than $.00049 per lead (or a CPM of under a nickel).

MRB managed to hit just about all of our media and analyst goals for Digium. That included coverage in virtually all the trade and business press targeted. We managed to build a case to Gartner, the leading technology analyst firm to have Digium included in their prestigious Magic Quadrant. We increased their revenues, number of partners (and helped create their partner program), and market share. Their mindshare is unquestionably the strongest in their industry (for their size).

In order to generate awareness of Digium, MRB created a media-driven public relations program, that would first focus on the technology and telecommunications analysts, trades and conferences, then moving to the business press. We recognized that by generating significant awareness among these industries, we would establish greater credibility when it came time to introduce Digium to the business press. Our aggressive business media campaign began only after enough trade coverage had been generated. Before targeting the trade media, we made a full scale attack on the underground Linux/open source world. We used popular bloggers, user groups, newsgroups and the like to generate the necessary buzz that Digium was about to explode on the telecommunications scene.

With Digium’s humble beginnings, its marketing experience was limited. MRB’s first program component was to create a messaging and positioning platform that would ensure the company’s story was clear, articulate and to-the-point. One of the goals here was to not only establish Digium as a company, but open source telephony as a telecom *category*. All of the communications materials were built to communicate the three to four key messages developed.

The PR program, built upon a strong messaging platform, included an ambitious announcement and pitch calendar for the year which would be used to schedule industry analyst and media briefings, while generating media coverage of the company. We positioned Mark Spencer as not only the president of the company, but a leader in the industry who could comment on much broader topics. The goal was to keep Mark top-of- mind for reporters working on larger industry stories. As the company became more well- known, we strategically began to introduce additional spokespeople to the analysts and media.

Announcements were based on a combination of new products and services, Asterisk community development activities, partnerships, etc., while pitches focused on the unique story behind Digium (Mark created the Asterisk PBX while still a student at Auburn University), relevant telecom trends and topics (anticipated growth of VoIP, the role of open source in telecommunications, converged communications, etc.) and case studies that were drafted by the MRB team. MRB also wrote and placed byline articles (for Mark Spencer and Digium spokespeople), secured positive product reviews and submitted for industry awards, in an ongoing effort to establish credibility of the company and its spokespeople.

Due to the limited budget, MRB identified conferences as a key component to a successful public relations campaign for Digium. We compiled a list of recommended industry conferences where Digium should exhibit throughout the year. We wanted Digium to appear larger than they actually were, and encouraged a trade show booth set up that included partners that were betting a great deal that Asterisk would succeed. Adding these partners (and their fees) to the booth meant securing booths that were 50’x 50’, rather than the 10’x10’s being considered. Adding these additional partners also increased the number of people and attendees in the booth space. As a result, their booth always appeared exceptionally crowded, adding to the curiosity of trade show attendees (and other exhibitors) creating even more buzz.

MRB was also aggressive in securing speaking engagements for Mark Spencer (and later in the year, other spokespeople) to discuss the future of telecommunications, VoIP and open source. MRB was successful in securing Mark Spencer (and his executive team) not only panel opportunities, but keynotes at major shows such as Pulver’s VON conferences, TMC’s Internet Telephony series, O’Reilly’s OSCON shows as well as Always On and others. These keynotes lead to further news coverage from media attending and reporting on these conference sessions.

It was the combination of positioning and creative, strategic story-telling, analyst, media and conference exposure that resulted in a huge awareness of Digium over the past year. MRB has successfully blanketed the telecom trades and placed high level business stories (122 features secured between July 2005 and July 2006, including a cover story on VON Magazine, a feature in Forbes, two features in BusinessWeek, a nationally syndicated Associated Press feature and significant coverage in the Financial Times and the New York Times).

MRB has also made introductions between Mark and major technology reporters at publications including BusinessWeek, Fast Company, Forbes, Newsweek, The New York Times, Smart Money, USA Today, and others.

Based on our aggressive and successful public relations program for Digium, open source telephony has been established as an industry category and Digium as the leader in this category. MRB is responsible for generating a high-profile media trail and creating important partnerships with industry analysts and industry leaders who continue to provide third-party testimonial support to Digium.

Main challenge was the fact that no one outside of the very technical Asterisk development community (under 100,000) knew what it was. We needed to prove that Asterisk was a viable option and was here to stay. Asterisk is largely a technical story, and we needed to drill down to the business aspects. Working with engineers directly, there was no marketing department or even marketing people to break down the story for us. We provided the services of an entire marketing team including public relations, on a limited budget.  Lastly, Asterisk had been criticized for its complexity.

* Alabama IT Awards: Entrepreneur of the Year: Mark Spencer

* VoIP Magazine: Companies to Watch
*
Some interesting facts about Digium:

* First year of MRB work, Digium had no marketing department

* Digium received nearly $20 million in funding since our hiring

* Digium now has well over 1 million downloads and is averaging 2,000 per day

* Asterisk has been written into 12 different languages


Mark Spencer, president of Digium has spoken at the following conferences:

VoiceCon
“The Role of Open Source in IP-Telephony”

Other Digium executives also spoke at the following conferences: